*1: “WASHLET™” is a registered trademark of TOTO Ltd.

Cumulative shipments of the electric toilet seat with bidet function, WASHLET™ sold by TOTO Ltd.
(headquarters: Kitakyushu City, Fukuoka; President: Madoka Kitamura) surpassed 50 million in March 2019. (Total
in Japan and overseas for spray seats and Integrated toilet). In the 38 years and 8 months since its launch in June
1980, shipment volumes have been growing steadily.

Trends in cumulative shipments of WASHLET™

The private household penetration rate*2 of electric toilet seats with a bidet function in Japan is 80.2% (2018). They are not unusual as household equipment. For public toilets*3, in the mid-term management plan “TOTO WILL2022,” which started in FY2018, TOTO is working to accelerate the installation of the WASHLET™ under the slogan of “make Japan a showroom to the world” and is seeking to provide experiences of WASHLET™ to the growing number of visitors to Japan.

Overseas sales are also growing steadily and shipment volumes have increased by a factor of about five*4 in these 10 years. TOTO will aim for further growth by setting the goal of promoting the spread of WASHLET™ across the world in “TOTO WILL2022.” 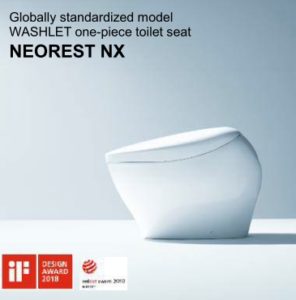 Recently, TOTO develops products focusing on the “fusion between design and function.” NEOREST NX, which was launched in 2017, the centenary of its establishment, won two awards: the “iF Design Award” and the “Red Dot Design Award.”

TOTO will continue its efforts to evolve WASHLET™ to meet the needs of each country and region and promote a comfortable and clean toilet culture in Japan and overseas.

*2: According to the Consumer Behavior Survey conducted by the Cabinet Office (Private household: National households excluding those of foreign residents and students, those residing in facilities, and single-person households)